New Look into the Membrane Proteins

Integrins are bidirectional, reciprocal, allosteric signaling machines that perform fascinating biofunctions (e.g. cell adhesion & growth, hemostasis, wound healing with platelets, cell migration with the vital integrin traffic) through conformational changes upon interaction with ligands in the extracellular matrix (ECM) on cell surfaces. Besides extensive research on integrin structures, binding patterns and therapeutic applications in treating cardiovascular diseases, cancer, inflammatory and autoimmune disorders over the past two decades, the structure-based activation mechanism of integrins particularly in the transmembrane (TM) domain remains unclear. Since long-range conformational changes couple integrin functions into and out of the membrane with the TM domain playing a critical and irreplaceable role, integrins provide a unique, clinically relevant paradigm for 2D IR to reveal their detailed structure in the membrane as well as the conformational dynamics pertaining to their activations and interactions with ligands (in a different, solvated microenvironment). Generally speaking, the proteins embedded in cellular membrane are among the most biologically important and versatile but they are extremely difficult to study even in vitro because they cannot be dissolved in water. Consequently, although integral membrane proteins comprise ~30% of open-reading frames in genomes, they only represent <1% of the entries in the Protein Data Bank (PDB). Challenge is opportunity. 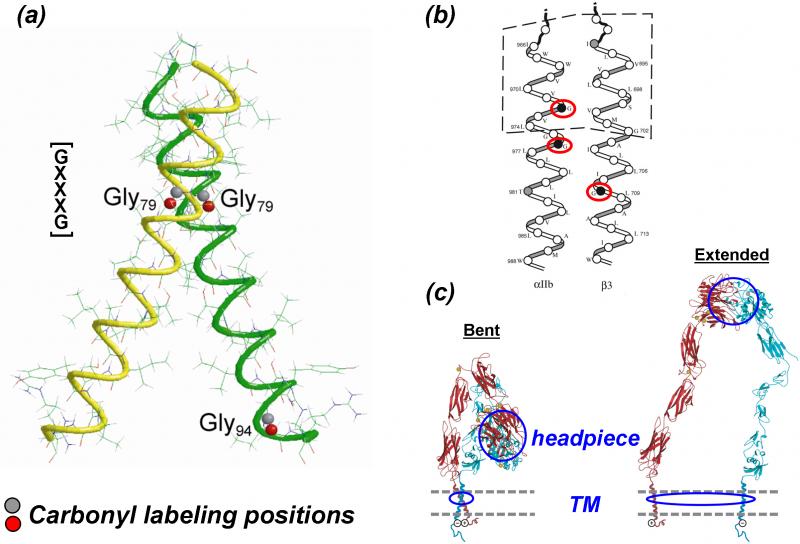 Models for GpA TM interaction and αIIbβ3 integrin activation. (a) Structural model of the GpA TM dimer showing the common [GXXXG] interfacial motif promoting helix dimerization (which may confer both stability and structural plasticity in a wide variety of membrane proteins) and the strategic isotope labeling positions for 2D IR measurement (PNAS 2006). (b) Relative orientation between the αIIb and β3TM domain alpha-helices as determined by disulfide scanning of residues shown within the dashed box. The proposed isotopically-labeled residues (mostly Gly's) for spectroscopic measurements are circled in red. (c) The bent (low-affinity, resting) and extended (high-affinity, adhesive) integrin confirmation with its TM and headpiece regions circled in blue. The TM and cytoplasmic domains are schematic with salt bridges (─ and +) shown. The long-range correlation between the headpiece (ligand binding site) and TM domain will be revealed by site-specific isotope labeling and time-dependent 2D IR.