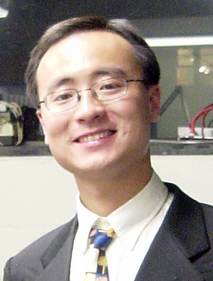 Dr. Chong Fang grew up in Wuxi (a scenic town near Taihu Lake and Shanghai), China and received his B.S. in Chemistry and Computer Application (dual degree) from the University of Science and Technology of China (USTC) in 2001. He was awarded the Guo Moruo Scholarship, the highest undergraduate honor. He came across the Pacific and North American Continent to settle in Philadelphia, completed his graduate studies in the Department of Chemistry at University of Pennsylvania (Penn) and received his Ph.D. in 2006 under the advisorship of Prof. Robin M. Hochstrasser, Donner Professor of Physical Sciences and Member of the National Academy of Sciences. His graduate work focused on the structure and dynamics of helices in both water and membrane environments using the Two-Dimensional Infra-Red spectroscopy (2D IR). He was awarded the Dean’s Scholarship in 2005 from the School of Arts and Sciences at Penn. He stayed at Penn for a few months after graduation to complete an important project concerning the ultrafast relaxation dynamics of a drug molecule in complex with its enzyme target, the HIV-1 reverse transcriptase (HIV-1 RT). He then moved across the US to the west coast in 2007, and did his postdoctoral research at the Department of Chemistry in UC Berkeley with Prof. Richard A. Mathies, G. N. Lewis Professor of Chemistry and Dean of the College of Chemistry at Cal. His work on the fluorescence mechanism of GFP especially in the ultrafast time regime showcased the resolving power of the newly developed Femtosecond Stimulated Raman Spectroscopy (FSRS) targeting photosensitive biomolecules, and was featured on the Nature Cover in 2009. In summer 2010, Chong found his new home in Corvallis, Oregon and started his independent career as Assistant Professor of Chemistry at Oregon State University. His affiliation with ONAMI will strengthen collaborations on novel bio/nano-projects. He has a growing interest in tackling modern biophysical and biochemical problems using state-of-the-art vibrational spectroscopies in the femtosecond to picosecond domain, resolving their intrinsic motions that are functional, and facilitating future bioengineering and biomedical advances. In his mind, life is fulfilling while research is opportunistic and enjoyable with a vibrant group of young talents in this exciting field where chemistry, physics, optics meet biology. In Sep. 2016, Dr. Fang was promoted to Associate Professor with Indefinite Tenure. In Sep. 2021, Dr. Fang was promoted to Full Professor.